Recently redbook.me got a cool new feature - reports! This is something that I’ve wanted to include for a while in the product, but hadn’t due to the difficulty of implementing it on the old architecture. With the new backend, however, implementing new features has been really fast so; reports! 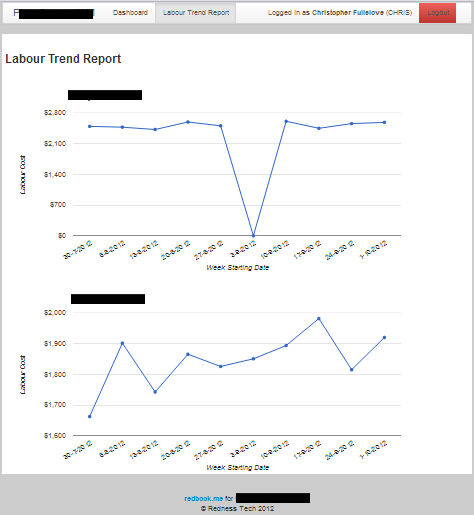 For now I’ve only built one report but I think its one of the more important ones - the labour cost trend. This allows managers/owners to look at how the weekly labour costs is trending over time. This is a very useful tool that allows identification of labour usage patterns that might not be otherwise evident - especially if you are tracking it against gross earnings. It can be helpful when building new rosters also, as it helps gauge the consistency with previous weeks.

Some of the reports I’d like to build in the near future are:

In this section I’ll give a quick overview of how the reports were implemented.

For presentation of the charts, I used the Google Charts API. Implementing the charts was fairly simple but it’s clear that there is a lot functionality offered that I have yet to take advantage of ;-). While I’m going to try not to put charts everywhere, I think there is room for their use in a number parts of redbook.me.